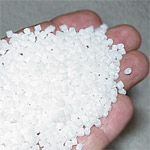 The process begins with filling a hollow mould with a pre-determined quantity of polymer powder or resin. This powder can be pre-compounded to the desired color. More often than not the powdered resin is polyethylene (PE) although other compounds such as polyvinyl chloride (PVC) and nylons can also be used. The oven is preheated by convection, conduction, (or in some cases radiation) to temperature ranges around 500 °F - 700 °F (260 °C - 370 °C), depending on the polymer used. When the powder is loaded into the mould it is closed, locked, and loaded into the oven.

After the melting has been consolidated to the desired level and the timing is right, the mould is removed from the oven and cooled. Cooling of the mould is typically done with air (by fan), water or sometimes a combination of both. Cooling allows the polymer to solidify to the desired shape and shrink slightly so that it can then be handled by the operator and removed from the mould. The cooling time can typically be measured in tens of minutes. It is important that the cooling rate be carefully measured because rapid cooling causes the polymer to shrink too fast and warps the part.

When it has cooled sufficiently to be handled and the polymer can retain its shape, the mould is opened and the part is removed. The moulding process can then be repeated by adding the polymer powder to the mould.